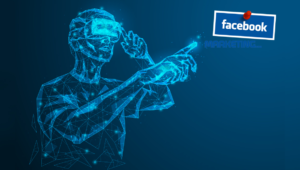 On Thursday, 28 October, CEO Mark Zuckerberg changed the name ‘Facebook’ to ‘Meta’. Rebranding of Facebook is the new Facebook marketing strategy employed by Zuckerberg. The word ‘Meta’ extracted from the Greek word. It means ‘beyond’ in English. Social media platforms such as WhatsApp, Instagram, Messenger will now come under the name Meta Platforms Inc.
The Metaverse does not exist in reality as of now. Sci-fi books and movies, such as The Matrix, Stranger Things, introduced the idea of “mirror worlds”. In “mirror worlds”, everything has a virtual counterpart in the real world.
In the Metaverse, without even leaving the comfort of your home, you can go to school, play games, and much more. There is a difference in dimension when you compare the Internet with the Metaverse. The Internet is two dimensional, which only includes text and images. In contrast, the Metaverse is three dimensional which will also include touch. The virtual reality platforms such as AltspaceVR and the hand-drawn Topia are somewhere similar to the Metaverse. The most popular multiplayer games, such as Fortnite and Roblox can also use Metaverse. But none of this even comes close to the parallel three-dimensional world Zuckerberg is introducing with his new Facebook Marketing strategy. However, it will take decades for Metaverse to come into existence. Not to mention the time it will take people to adopt it! The CEO of Epic Games, Tim Sweeney, in his 2016 talk, said that the Metaverse is going to be far more powerful than anything else. The new Facebook marketing strategy will also help Facebook distract people from whistleblower leaks that have maligned its reputation in recent weeks. However, the ambitions of Facebook will not waver. The concept of Metaverse is going to make Facebook so much more powerful than it already is!

As per Interbrand’s annual brand value ranking, with an estimated brand value of US$36 billion, the brand of Facebook dropped to 15th place in October 2021. It was last ranked 15th in 2017 before jumping to 8th position in 2017. At the same time, the brand value of Google, Amazon, Apple, and Microsoft reached a whooping somewhere around US$400 billion. With the recent events that damaged the name of Facebook, it became quite essential to introduce new Facebook marketing methods to repair the damage. The leak of Facebook data to Cambridge Analytica added with Apple making it more difficult to track its consumers through apps, has led to many problems for Facebook. The inability to track its consumers leads to lower revenues for Facebook. The new Facebook Marketing method is trying to revive the trust of its users and increase its revenue in the coming years!

Will The Name ‘Meta’ Stick With People?

As per his new Facebook marketing method, Facebook has renamed itself, Meta. However, whether the brand Meta will stick depends on how the company will play its new Facebook marketing strategy. For instance, when you think of Alphabet, a holding company is not a consumer brand. Therefore, it is not a household name. Similarly, it is unlikely that the name Meta will stick with people. Unless Facebook Marketing makes Meta a brand relevant to consumers, it will not stick as a household name.

What About Other Social Media Apps?

Since the new Facebook marketing strategy, people have been confused about what will happen to Facebook and other social media platforms available. The name ‘Meta’ brings together all the apps and technologies under one company brand. However, this does not mean that users of Facebook and other social media platforms will face any changes. The websites and social media apps will continue to have their old name. Zuckerberg says they do not want to be only known as a social media company. Their new Facebook marketing method aims for Facebook to be known as a technology company. The new meta platform will be more immersive, and users can do any unimaginable things. His Facebook marketing strategy also plans to inculcate crypto and NFT in Metaverse, which will give the privacy of users utmost importance.

Zuckerberg says that they have shifted from desktop to web to phones. And also from texts to photos to videos. But this is not the end! Mark is confident that with ‘Meta’, people will experience a feeling like never before. Metaverse as a concept is not new and has become popular in recent months. Introduction of ‘Meta’ as their new Facebook marketing strategy, the company announced in June they will form a new team to work on Metaverse. In 2022, the Head of the company’s hardware division, Andrew “Boz” Bosworth, was promoted to the role of Chief Technology Officer. Zuckerberg hopes that Metaverse will reach a billion people in the coming decade. He has high ambitions for Meta to host hundreds of billions of dollars of digital commerce and create millions of jobs for creators and developers. Facebook also plans to spend dollar ten billion next year to develop its new project – Metaverse.

I work with clients from different industries including travel, fashion, educational services and health sector.

How To Organize Your Email Marketing Strategy In 5 Easy Steps?

Why Is SEO Important In 2023? An interesting marke...
Read More
SEO Fundamentals

How to Use Answer the Public Tool to Get More Traffic?

Introduction To Answer The Public Tool Anyone with...
Read More
Technical SEO

Difference Between Http and Https

Understanding The Basics Of HTTP And HTTPS The fir...
Read More